is a large coastal town and seaport in the county of Dorset, on the south coast of England. The town is 33 kilometres (21 mi) east of Dorchester, and adjoins Bournemouth to the east. The local council is Borough of Poole and was made a unitary authority in 1997, gaining administrative independence from Dorset County Council. The borough had a population of 147,645 at the 2011 census, making it the second largest in Dorset. Together with Bournemouth and Christchurch, the town forms the South East Dorset conurbation with a total population of over 465,000.

Human settlement in the area dates back to before the Iron Age. The earliest recorded use of the town’s name was in the 12th century when the town began to emerge as an important port, prospering with the introduction of the wool trade. Later, the town had important trade links with North America and, at its peak during the 18th century, it was one of the busiest ports in Britain. In the Second World War, Poole was one of the main departing points for the Normandy landings.

Poole is a tourist resort, attracting visitors with its large natural harbour, history, the Lighthouse arts centre and Blue Flag beaches. The town has a commercial port with cross-Channel freight and passenger ferry services. The headquarters of the Royal National Lifeboat Institution (RNLI) are in Poole, and the Royal Marines have a base in the town’s harbour. Despite their names, Poole is the home of The Arts University Bournemouth, the Bournemouth Symphony Orchestra and a significant part of Bournemouth University. 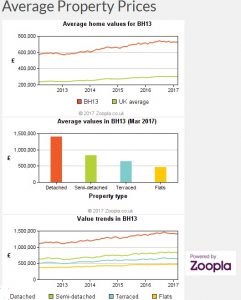 Geodemographic data is grouped into 1 of 50 or so postcode classifications. This information reflects that classification, so it isn’t always representative.

Derived from census and survey results, this section gives some broad indicators of how the residents of this postcode live.

Ways to improve the value and/or saleability of your property.Highcliffe on Sea – Place on a Page
DOWNLOAD OUR BOOK

Thinking of buying, selling, renting or renovating a property?

You can get our detailed guide, filled with lots of unique insider tips and tricks,

along with loads of useful guidance by clicking the LINK below.